© 2022 Gekht BM, et al. This is an open-access article distributed under the terms of the Creative Commons Attribution License, which permits unrestricted use, distribution, and reproduction in any medium, provided the original author and source are credited.

For more than 25 years, we have begun an experimental study of the physiological effect of micromolar concentrations of reactive oxygen species on the regulatory functions of the central nervous system. We found that these effects extend to the CNS centers and hormonal regulation of the hypothalamus and pituitary gland [1-4], as well as in the control of BBB permeability [5].

In long-term experimental studies, other physiological effects of exogenous ROS were discovered, of which we note first of all the effects realized through the CNS. These are the potentiation of analgesic narcotics [6] and other drugs, a decrease in the toxic effect of MPTP, and the regulation of other MAO-dependent processes [7].

It has also been surprisingly found that endonasal application of micromolar concentrations of some ROS, such as activated oxygen (superoxide) and hydrogen peroxide, reduces the symptoms of Parkinson’s disease and parkinsonism [8-10]. The first drug based on micromolar hydrogen peroxide was the German and Russian medicine Parkon® [11].

We investigated 19 patents with the PD (8 males and 11 females) using the Hoehn & Yahr scale and UPDRS scale [12]. Also, we performed the neurophysiologic investigation using High-Frequency Transcranial Magnetic Stimulation (rTMS) and electromyographic (EMG) studies. The patients were investigated in a double-blinded placebo-controlled manner. Group A (10 people) received Parkon and Group B (9 people) received a placebo during a 4-week course.

According to the inclusion criteria all patients had hypokinesia and at least one of the following symptoms: muscle rigidity, tremor (4-6 Hz), postural instability (not connected to visual, vestibular, cerebellar dysfunction).

Due to the use of magnetic stimulation, the study excluded people with pacemakers and metallic foreign objects.

There were no statistically significant differences on Hoehn & Yahr and UPDRS scales between the groups.

Results of treatment with Parkon

All patients tolerated therapy very well. As a result of treatment with Parkon, patients did not experience negative ECG changes, arrhythmias, arterial hypertension, postural disorders, and mental disorders. During treatment, the patients of the Parkon group showed a statistically significant improvement in symptoms according to the UPDRS scale. The mean UPDRS score in the subgroup with tremors before treatment was 38.9 ± 11.5, after 4 weeks of treatment it decreased to 24.7 ± 9.7 (p < 0.05). The average index of motor and neuropsychological disorders in the subgroup of the rigid form was 56.3 ± 12.4 (p < 0.05) on the UPDRS scale and decreased to 34.8 ± 12.8 (p < 0.05) after 4 weeks of treatment.

It’s important to note that both cohorts showed improvements in the emotional-motivational sphere and a decrease in depression symptoms, which was reflected in the changes of the corresponding parameters on the first part of the UPDRS scale. Analysis of Parkson’s efficacy revealed that statistically significant improvements were observed in all patients from Parkon Group, regardless of their history of using L-dopa-containing medications.

The neurophysiological investigation was conducted using magnetic stimulator “Maglite” and “Keypoint” devices made by Medtronic-Dantek (USA-Denmark). Transcranial stimulation (rTMS) was used for both groups. The neurophysiological examination was performed at least twice during the study: before the administration of Parkon and after 4 weeks of administration. The method of transcranial magnetic stimulation with a period of silence was used. Parameters analyzed the Silence Period (SP) and Central Motor Conduction Time (CMCT).

No side effects were observed during and after the magnetic stimulation.

Patients with PD (both with predominantly tremors and rigid forms) showed a positive dynamic of clinical symptoms as a result of treatment with Parkon. This is reflected in a statistically significant (p < 0.05) reduction of the mean score on the UPDRS scale.

Neurophysiologic analysis, which showed the increased duration of SP during the treatment in patients with a predominantly tremor form of PD, allows us to conclude positive clinical dynamics in a given group of patients. The mechanisms of these changes need to be investigated further and they are possibly connected to Parkon having an inhibiting effect on MAO activity, mainly MAO-B, in the basal ganglia and hypothalamus influencing thalamocortical, rubrospinal, and reticulospinal tracts. In addition, these results confirmed the idea of the biologically important role of micromolar concentrations of exogenous reactive oxygen species, i.e. H2O2 [3]. Moreover (and this is interesting in itself), in recent years original and review articles on the important regulatory role of endogenous H2O2 in comparable concentrations have often appeared in scientific periodicals see for example [13,14].

The biological and, in particular, the established physiological role of exogenous activated oxygen and hydrogen peroxide is discussed in more detail in the works [3,4,15]. 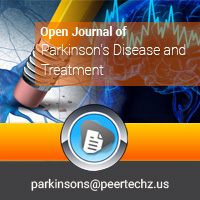