Prevalence of Asthma and Its Association with Daily Habits in Jimma Town, Ethiopia

Background: Many studies showed a low risk of asthma in sub-Saharan countries. However, due to indoor pollutions and environmental hazards, developing countries are always the prior victims of all types of respiratory illnesses including asthma. Jimma, south-western Ethiopia, is known by its wide range of vegetations including khat and coffee. Together with high plantation of those cash crops, there is widespread consumption of them by the locals.

Objective: To investigate prevalence and severity of bronchial asthma and its association with daily habits in Jimma town, Ethiopia

Conclusion and clinical Relevance: Bronchial asthma is public health burdon in Jimma town. FVC, FEV and PEFR functional parameters were lower in asthmatic patients when compared to nonasthmatic participants that may indicates the severity of asthma in the study area. Lung functions, onset, severity & asthma managements could be affected by the daily consumption of khat, coffee, and cigarette.

Respiratory diseases are always the commonest public health burden across the globe [1]. Among them asthma is the widely spread that potentially attack people of all age and race [2]. Asthma is a disease of both sexes [3]. To date more than 200 million people worldwide are experiencing asthmatic attack resulting in more than 0.18 million deaths per year [1]. It becomes an increased concern of many societies especially developed countries. However the rate of the disease burden is always evaluated in developed countries, the greatest public health challenge is on developing countries due to poor disease management and monitoring & evaluation of the disease progress [4,5]. Many studies showed a low risk of asthma in sub Saharan countries. A worldwide prevalence study on asthma and allergies in childhood indicates that prevalence rate in Ethiopia was 9.1%, Kenya 15.8%, Nigeria 13.0%, South Africa 20.3%,Algeria 8.7%, Morocco 10.4%, and Tunisia 11.9%.The highest prevalence was in Costa Rica 37.6 while the lowest in the list was Albania 3.4% next to Indonesia 2.8% [6]. The potential factors for the onset and exacerbation of asthma was investigated several times by different researchers. Genetic predisposition or environmental factors are indicated for asthma prognosis. indoor and outdoor air pollution, personal and environmental hygiene, occupational hazards are mentioned as especially the biggest issues in developing countries to cause disease [7].Stress, malnutrition, drug use for comorbid diseases are also risk factors indicated for the onset of asthma in a different times of individuals life [8].Apart from the aforementioned risk factors some of the daily habits could influence asthma recurrence, exacerbation or have potential preventive properties. Khat, for example, has been traditionally used as a remedy for common cold [9] and asthma [10].

Beside to Khat, long-term consumption of coffee could have effect in reducing asthmatic symptoms and episodic attacks [11,12]. On the other hand, regular smoking could be the reason for the late onset of asthma and its exacerbation [13,14].

This study deals with the prevalence of asthma and the effect of daily habits that are associated to asthma among adults who are permanent residents of Jimma town. In this study daily habits are defined as khat chewing, consumption of coffee and smoking cigarette. The study area, Jimma town, is known by its khat cultivation and consumption apart from its being the origin and high plantation of coffee [15, 16]. Chewing khat is mostly accompanied by coffee ceremony and smoking cigarette by the local community [17]. To the best of the author’s knowledge this study is one of its kinds in the area to provide important information about magnitude and severity of adult bronchial asthma in Jimma town together with its association with the daily habits that are defined above.

This study was conducted in Jimma town. Jimma is located 354 km south west of Addis Ababa. The town has an average altitude of 1760 mt above sea level with the minimum and maximum temperature of 11oC and 27 oC respectively. According to the national census done in 2007, the total population of Jimma town was estimated to be 120,569. The population composed of Muslims and Christians with diversified ethnic groups. Muslims and Oromos are predominant in number. Jimma is one of the cash crop producing areas in Ethiopia where coffee and khat are grown abundantly as the major source of income.

Study population-All adults who were permanent residents of Jimma town.

The above calculated sample size was multiplied by two since multistage sampling technique was undertaken. Therefore the final sample size was1200.Adding 10 % the non-response rate the total study population was 1320 individuals.

A house to house survey was done in all 13 Kebeles of Jimma Town. From each Kebele, 102 households were selected using systematic random sampling technique and from each house, one adult member of the family was selected by a lottery method to respond to the questionnaire and undergo spirometry until the required sample size was attained.

Ethical consideration: The consent of study participants was assured before asking and taking any tests. And the information obtained from the participant was kept confidential and this was verified to participants verbally and in a written sheet. Special care was given to elders and pregnant.

Chewer participants had higher pulmonary function tests. Though it was not statistically significant, only FVC was found higher among nonsmokers. Mean predicted percent FEV and PEFR were found to be the same as nonsmokers or high among smokers. Except for FVC, the other pulmonary function test parameters were higher among participants who had the habit of consuming coffee (Table 2).

Among total asthmatic respondents, some of them had hardly recalled the exact frequency of asthmatic attack per a given period of time. As a result, the number given under each category varies. Among female asthmatic participants, 28.0 (63.6%) of them had more than once per week asthmatic attacks while 30 of them had greater than twice per day usage of short-acting B agonist.

In Ethiopia, it is noticeable that the number of males who chew khat and smoke cigarette outnumbers females. However, coffee drinking is practiced more by females. As in this study, such proportionality difference was also shown by previous studies [17, 18]. Consuming khat and smoking cigarette are prohibited by religion rules and are cultural taboos for women while they are not strictly forbidden for males [18]. A large proportion of Muslim religion followers found to chew khat and smoke cigarette than other region followers. This is in line with previous findings explaining Muslims use Khat during prayer [17]. The number of the married participant who practiced chewing khat, smoking cigarette and consumption of coffee was high. This finding was in contradiction with the former study where married khat chewer participants were smaller than their counterparts. However, in the study, the number of the married participant was significantly larger [17]. Practically, in married Ethiopian houses, there is a tradition to make a more regular coffee ceremony than single households. Chewing khat, consumption of coffee and smoking cigarettes in Oromo ethnic participants were more common than the others. This result was also in line with the previous studies [18]. The study area is more populated by Oromo society and the number of participants from with Oromo ethnic background was outnumbered by the other ethnicities. The number of college/university graduates who practiced khat chewing consumption of khat and smoking cigarette was higher than the rest of their counter partners. Kaht is perceived to increase concentration by the community. As a result, individuals used it while reading and study regular lessons [19]. A significant number of housewives consume coffee than the other group of participants. In Ethiopian tradition, women thaw coffee parties and ceremonies at least once a day especially when they are not working wives.

Percent predicted mean FVC and FEV of male respondents were higher than females. The finding was similar to previously published articles as mean personal percent predicted pulmonary functions tests were higher than females [20-23]. Pulmonary function test parameters, FVC, FEV, and PEFR, among chewer, were found to be higher than nonchewers. The results indicated as it is similar to the previous fining which indicated lower mean predicted pulmonary function parameters percentages [10]. Khat might indeed have bronchodilating effect when chewed before the measurement considering the half-life of its active ingredients to cause an effect. Together with that, previous research explained bronchial muscle tone could be modulated by the effect of the active ingredient in khat [24,25]. Mean personal percent predicted FVC was higher among nonsmokers. However, the finding was not statistically significant which could be as a result of a disproportional number of participants between the two categories. The mean percent predicted of PEFR and FEV were higher among smokers than nonsmokers. This finding contradicts the previous study where pulmonary function test parameters were lower among smoker participants [26,27]. Percent predicted mean of FEV and PEFR among coffee consumer participants were significantly higher than their counterparts. These findings are in line with the previous research that showed the potential bronchodilating effect of caffeine in coffee resulting in an increased pulmonary function test parameters [12].

In this study, the prevalence of asthma was 4.9%. Even though there is no recent study on the prevalence of asthma in Ethiopia and particularly in Jimma, Previous studies showed closer prevalence rate as this study. To date, asthma is widely spread than before and it is expected to be higher than the previous prevalence rate which was around 5% [28,29]. Females were found to be affected by asthma than males. This is particularly true that after puberty women are more likely to be attacked by asthma than men. The result is in line with previously published works [30-32]. A number of unpublished and published articles mentioned the protective value of testosterone over a fluctuating concentration of estrogen in females in reducing the risk of onset of asthma and its symptoms [33]. Among asthmatic patients, the larger proportions were housewives. As a result, it is possible to predict Indoor pollution is associated with asthmatic attacks as it is highly prevalent in developing countries here [34]. The family history of asthmatic history and current asthmatic status were found to be strongly associated. To date, there are a number of confirmed genes associated with susceptibility to allergens at different ages [35-37]. Thus predisposition can be linked through families [38]. Among asthmatic respondents majority of them confronted they chew khat. There exists a belief that khat reduces asthmatic symptoms [39]. It could also have somehow a relief effect when chewed during or before the attack [10]. The majority of chewer also consumes coffee. Coffee has a therapeutic effect by bronchodilating airways [12], it could also have a beneficial effect by reducing symptoms of asthma [11] these and personal preference to drink could be the reasons for consuming coffee by asthmatic patients.

Except for FVC, the other pulmonary function tests were significantly higher among nonasthmatic participants. This is in line with the fact that bronchoconstriction due to excessive inflammation results in difficulty of breath especially expiration which is revealed by a decrease in pulomary function test parameters [44-46]. Women often experience more severe asthma symptom with a frequent episode of attack than men [31]. Even though the exact mechanism is not yet clear, as described above the protective value of testosterone together with the effect of estrogen and progesterone as agents that potentially induce inflammation reactions favors men to have less severe and recurrent asthmatic symptoms after puberty [31,47].

In this study the prevalence of asthma is close to the previous studies. Apart from that, high plantation of coffee and khat could be the reason for the high consumption of those cash crops by the local communities. Accordingly, the onset, severity and asthma management could be affected by the daily consumption of khat, coffee and cigarette. In the same way, lung function might be directly affected by the aforementioned factors.

© 2018 Tefereedgn EY, et al. This is an open-access article distributed under the terms of the Creative Commons Attribution License, which permits unrestricted use, distribution, and reproduction in any medium, provided the original author and source are credited. 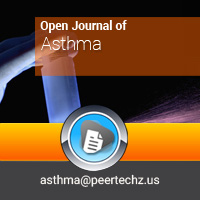