Lumbar spinal stenosis is a frequent ailment that affects people over 50years. With previous studies by J. Zucherman, and the cadaveric investigations with maximum flexion and extension by W. Rauschning, it was demonstrated that the bulging of the posterior longitudinal ligament and the ligamentum flavum were the main causes of radicular compression; but, the key aspect was that once the interbody space was expanded, the compression was relieved. However, a posterior stabilization and an interbody arthrodesis must be performed.

In this study there were 128 patients divided in 2 groups; the technique was to introduce interbody spacers through Kambin’s triangle.

In the first group, the interbody space was opened with Zeus peek spacers, and in the second group the titanium HQ (Hernández and Quintana) screw was used.

The results were good in 85% of the patients with the peek spacers, and 90% for the second group with the HQ screw. It was found that the screw spacers were much more stable than the regular spacers, thus presenting far less complications.

Since the average lifespan has increased, a greater number of patients will develop a lumbar spinal stenosis, which will result in a lumbosciatic pain.

Even though many of these cases have a positive outcome with orthopedic and conservative treatment, this disease, is proving to be one of the most common causes of surgical intervention in people over 50.

The bulging of the ligamentum flavum and the posterior longitudinal posterior ligament, as well as the facet joint subluxation that are present in the lumbar spinal stenosis, are the causing agents of the majority of the compression with a radicular component. Nevertheless, simple image studies and an MRI [3,4] are needed to confirm the compression.

This was demonstrated in the biomechanical studies performed in San Francisco by Dr. Zucherman and in Sweden by Dr. Rauschning, who revealed in cadaveric specimens that when in maximum extension, the lumbar spine presented a root compression due to the bulging of the ligaments (Figure 1) and the facet joint subluxation, but most importantly, in maximum flexion the ligaments would stretch, thus reducing the bulging and the subluxation and relieving the compression [5,6].

Figure 1: Physiopathology A: Normal measurements of the intersomatic space, the conjunction holes and the interspinous space. B: Lumbar spinal stenosis greater than 50%, note the root compression given by the posterior and flavum ligaments. C: Photo by Dr. Rauschning(6) where a bulging is demonstrated of the flavum and posterior ligament that produce the root compression, and once the intersomatic space is widened the compression is relieved. (A: Vertebral bodies, B: Posterior longitudinal ligament, C: ligamentum flavum, D: Compressed root). D: Spinal stenosis caused by spondylolisthesis.

Given the fact that the interbody spacers frequently undergo sinking into the vertebral body and migration, Dr. Quintana began to use circular screws, as used for ligament fixation in the knee. Later, Dr. Quintana and Dr. Hernandez, with the help of engineer Montoya, designed the HQ screw. They worked on the designed so it could have a narrow tip (Figure 2) cannulated, and with an opening for graft placement.

Biomechanical testing proved that the HQ screw was very stable, and by having a circular shape it did not suffer any type of sinking. Therefore, it was concluded that the screw had at least these advantages over the Zeus spacer: narrow tip that can open the interbody space, and a better grip than the surface teeth in peek spacers.

With this technique, the patients will undergo a quick and easy recovery, and with only a 15mm incision skin and aponeurosis can be opened; afterwards, a narrow tip dilator is inserted through Kambin’s triangle and all the way to the interbody space.

Through this dilator a cannula is introduced to perform a discectomy, to scrape the vertebral body platforms in order to produce bleeding, and to introduce the bone graft.

Kambin’s Triangle (Figure 2a) is formed by the base of the vertebral body, the facets and the hypotenuse formed by the nerve root; it measures on average 12mm wide by 18mm high [7].

A total of 128 patients were taken into account treated by Dr. Hernandez, Quintana, Montes and Cantu with a 5 to 6 year follow up which were divided in 2 groups.

The first group consisted of 67 patients, which were treated with interbody peek spacers (Zeus), with a squared body, bullet tip and an opening for graft placement in its superior and inferior surface, with surface teeth for holding (Figure 2c), through Kambin’s triangle and posterolateral placement. Taking into account that these should always have a posterior stabilization with transpedicular screws.

The second group of 61 patients was treated with the before mentioned technique; however the peek spacer was substituted by a HQ screw. Given the stability that these have, when it is only one level that is affected, interspinous spacers were placed, making it possible for the procedure to be done with only one 15mm incision.

With the patient in a prone position, local anesthesia is given as well as a mild sedation. With the use of fluoroscopy and using the Anthony Yeung technique, the starting point is located. The discography needle is used to reach the work space and a guide is placed through the needle (Figure 3a). A 15mm incision is performed through which skin, subcutaneous tissue and aponeurosis is cut. A 7mm dilator is introduced which dissects muscle all the way to the base of Kambin’s Triangle. It is impacted to the midpoint of the interbody space and through this dilator a duck-billed tip cannula is introduced. Using the endoscope the disc is extracted (Figure 3b) and the vertebral surfaces are scraped until bleeding is present. Afterwards 5grams of allogeneic graft or from bank are introduced (Figure 3c). A guide is introduced which rests on the base of the triangle and through this guide wire the interbody spacer tests are performed. Once a right size is found, one that can be introduced with a tight fit, the surgeon must select the next size up (Figure 3d). The cannulated section is filled with bone graft and it is introduced screwing in the base of Kambin’s triangle until it has exceeded the 6mm mark from the posterior wall of the vertebral body. A simple suture is performed on the skin, ending the surgical procedure [9].

Patients are released from the hospital aft 24 hours of observation, emphasizing the importance of ice placement on the wound the first 3days post-op as well as a 15days regime of antibiotics, analgesics, anti-inflammatory medication, and muscle relaxants.

Patients can start to walk 2 days after the surgery with a continuous use of a lumbar support belt for the next 6 months Figures 4,5.

Figure 4: Case 1- 65 year old male patient with lumbosciatic pain, irradiated to the left thigh and calf. A: Lumbar stenosis greater than 50% with important formainal compression in L3-L4/L4-L5. B: Scoliosis and spinal stenosis is observed at the same levels. C: Postop Lateral lumbar X-ray where the widening of the intersomatic spaces to 10mm can be observed with the H.Q. screw, as well as a widening of the conjunction holes. D: Postop AP lumbar X-ray where the same changes can be perceived as in the lateral x-ray, with 3 transpedicular screws placed unilaterally.

Figure 5: Case 2- Female patient 75 years old that has a lateral subluxation of L1-L2 following direct trauma, with intersomatic narrowing of L1-L2. A: CAT scat where a posttraumatic kyphosis can be observed in L1-L2 as well as a narrowing of the intersomatic space of L2-L3. B: Lateral subluxation of L1-L2. C: Post op Lateral imaging with an H.Q. screw in L1 – L2 to widen the intersomatic space as well as the conjunction holes, and 2 interspinous spacers. D: AP Post op view where the H.Q. screw has reduced the lateral subluxation and a correct placement of the interspinous spacers. This surgery was realized with a minimal invasive technique with 2 15mm incisions with satisfactory results.

In order to assess pain, a visual analogue scale (VAS) was used, and the Oswestry Low Back Pain Disability Questionnaire was used to assess patient functionality. Graft fusion was evaluated by simple x-ray imaging taken at 6, 12, and 18 months post-op by using the Bridwell scale Tables 1,2 [10].

Likewise, complications such as lower limb paresthesia, implant migration and sinking were taken into account.

Regarding the peek spacer migration, a displacement was found in 10% of these results which ultimately led to the need of a second intervention, one of which resulted in an infection of the surgical site.

In the migration of the HQ screw, it was found to be less than 4mm, so there was no need to perform any surgical interventions. Due to the fact that the screw is more stable than the peek spacer, posterior stabilization is achievable by percutaneous interspinous spacers. On the other hand with peek spacers a posterior stabilization must be achieved with transpedicular implants.

On consolidation: Peek spacers can better visualize the evolution of graft fusion because they are radiolucid. Also, it was observed that stabilization was faster with autologous graft rather than synthetic or from graft banks. However, when stem cells and growth factors were mixed with the graft fusion time was accelerated.

Regarding other complications like paresthesia, we must take into account that in Kambin’s triangle, 30% of the superior platform is occupied by the root ganglion, which is quite delicate (Figure); thus it is recommended to place the screw in the base of the triangle and not in the middle.

The sinking of the peek spacers is in part due to their squared shape, making the load or weight bearing greater; on the other hand, the screw is circular and this helps decrease the loads [3-10].

The longitudinal instability is given by a reduced interbody space caused by a bulging of the posterior ligaments and the ligamentum flavum, as well as a subluxation of the facet joints.

The opening of the interbody space with peek spacers of HQ screw reduces the compression and liberates the nerve root.

It is possible to place the peek spacers and HQ screws through a percutaneous approach through Kambin’s triangle with a 12mm incision.

In our experience the HQ screw, we consider, is more stable than the peek spacers.

In order to decrease complications it is important to introduce the screw at a 45° angle on the base of the interbody space as well as the use of local anesthesia and sedation.

© 2020 Sirinoglu D, et al. This is an open-Access article distributed under the terms of the Creative Commons Attribution License, which permits unrestricted use, distribution, and reproduction in any medium, provided the original author and source are credited. 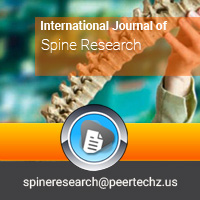