Diagnostic accuracy of skin prick test and specific IgE and their association with Total IgE, AEC and serum cortisol in Indian patients with respiratory allergy

Methods and findings: A retrospective stratified sample of 75 respiratory allergic patients within age group of 05-70 years was included in the study. Serum total IgE and specific IgE levels were estimated by using ImmunoCAP® system and SPT was done by standardized allergens (Allergo Pharma and Greer laboratories Inc.).

There is a consistent increase in allergic diseases from 10 to 30 % for the last 50 years in India [1]. The global prevalence of Allergic Rhinitis is between 10 to 30 % for adults and as high as 40% for children [2]. SPT and Measurement of sIgE are important tools for diagnosing atopic sensitization and both tests are often used interchangeably. There is no universally acceptable gold standard cut off value for either of these tests associated with allergic diseases, although practice parameter third update guidelines recommends that wheal size threshold of > 3mm cutoff criteria has better clinical accuracy which is based on reproducibility in relation to nasal provocation test. There are several factors which can modify the test such as skill of the tester, the testing device, the color of the skin, skin reactivity on the day of testing, potency and stability of allergen extract reagent [3,4].

There is a strong association between acute episodes of respiratory allergy (Allergic Asthma) with increase in total IgE > 250 IU/Ml). Most individuals have very low level of circulatory serum IgE (< 100 IU/ml where 1 IU = 2.4 ng IgE). Allergen specific IgE should be considered as a marker for atopy and IgE sensitization but it cannot predict clinical severity of reactions and will have to be interpreted on the basis of the individual’s case history [7,8].

There is a complex interaction of neuroendocrine and metabolic immune system. Inhaled corticosteroids are the mainstay treatment for respiratory allergy and there is an increasing concern about their systemic side effects especially adrenal suppression. Basal serum cortisol is an indirect biomarker for detecting suppression of HPAA and the disease severity [9].

Peripheral blood eosinophilia is a hallmark of severe allergic disease and correlates with severity of the disease due to synthesis of IL5-prominent Th2-driven immune response. Infiltrating eosinophils release MBP, ECP, and EPO which in turn injure the nasal epithelial cells and induce hyper responsiveness & chronic remodeling [10,11].

Data from 75 participants coming to outpatient department of National Allergy Centre, presenting with respiratory allergy was analyzed retrospectively. The patients were without history of food allergy as recorded using a standard questionnaire.

All these patients were also sub- categorized into different age groups (Figure 1).

The patients were without any history of food allergy as recorded using a standard questionnaire.

The diagnosis of Respiratory Allergy (allergic asthma with rhinitis) was made based on history and clinical investigations following the criteria of GINA guidelines (2014) [12,13].

Data obtained from SPT tests by various allergens of these patients was recorded. Sensitization to food (7 Allergens) and common environmental allergens (35 standardized): (Pollen/Fungi/Dust mite/ Cockroach) (Allergo Pharma & Greer lab Inc.) were tested. The skin test reactions were tested with standardized allergens and were graded after 20 minutes in comparison to the wheal size of positive control, i.e. histamine diphosphate (10 mg/ml). In which maximum horizontal diameter of wheal >4 mm was considered as immunologically significant positive reaction. Why is there a low level of agreement between SPT & s pIgE in case of fungi & food allergens? It could be because of the presence of different extracts of proteins and Epitopes present in the commercial SPT kits. In our study SPT was done with Alk Lancet which is reliable, tolerable and comparable with other devices [14,15].

The statistical analysis was performed using SPSS (Statistical Package for Social Sciences) version 10.5 software. The data was analyzed for all variables using the Chi-square test.

75 subjects were analyzed for respiratory allergy against foods & Aero-allergens in which poly-sensitization was seen in maximum patients (n=60, 80%) (Figure 2), we further did analysis for allergen categorization in these patients.

Figure 2: Sensatization Pattern (Based on SPT and Specific IgE).

Figure 3: Categorization of allergens in Monosensitized & Poly-sensitized ( based on specific IgE & SPT) patients.

The combined results for both tests (SPT>4 mm and sIgE >1 kU/ml) demonstrated a significantly higher sensitivity. Data below showed a high level of agreement between SPT and sIgE Figures 4-8.

Total serum IgE estimation was carried out from the available data, cut off range was taken as > 250.0 IU/mL

Following distribution was derived from this data Figures 9-11.

Immune response for sIgE is different in skin & blood for allergen sensitization. Skin Allergen testing has a higher specificity & sensitivity than sIgE (with a cut off of 0.35 kU/ml) regardless of the type of allergic diseases. Food sensitization in Respiratory Disorders by SPT or sIgE must be interpreted with caution because of the presence of cross reactivity of food allergens with pollens, fungi, & dust mites etc. Some studies have compared the cut-off level of both sIgE & SPT sensitization to aeroallergens or food allergens in respiratory allergy. In one study of “PASTURE” (protection against allergy study in rural environment), cohort has suggested that there is a disagreement between SPT & sIgE in the first six years of life. In another study 12.1 % of patients would have been misdiagnosed, if only sIgE had been performed, while 45.2 % would have been misdiagnosed if only SPT had been performed. It is still controversial to comment as to which of these tests (SPT & sIgE) is better than the other? Will both the tests in combination (SPT & sIgE) improve sensitivity & specificity? [17-19].

SPT wheal size threshold of > 3 mm cut off criteria has better clinical accuracy which is based on reproducibility in relation to nasal provocation test rather than clinical relevance in considering several co-factors such as skill of the tester, the testing device, color of the skin, the skin reactivity potency & stability of allergen extracts reagents. But the level of accuracy of spIgE cut off value for various groups of allergens has not been well defined in guidelines. Sampson H, et al. [20] have given variable cut off values of sp IgE serum level for different food allergens that can predict clinical reactivity in (90-95) % of group studies. In our study we have considered >4 mm SPT and spIgE > 1 kU/ml criteria as reasonably accurate in identifying sensitization in physician based diagnosis of respiratory allergy which differs from the International threshold cut off criteria of SPT >3 mm based on nasal provocation test [4,21].

In the current study of 75 subjects of respiratory allergy both SPT & sIgE were carried out to detect the level of agreement (Concordance Vs. Discordance), and their relevance with Total IgE, AEC and S. Cortisol.

Sensitization was considered immunologically significant, if SPT showed >4mm wheal size & sIgE ­was >1 kU/ml and a higher percentage of sensitivity and PPV was observed (Average Percentage: Sensitivity – 89.3%, PPV – 69.28%) on combining both the tests.

In case of food allergens there was no agreement between SPT & sIgE with high specificity of 100% & Negative predictive value (NPV) of 100% for detection of respiratory allergy.

Low level of S. Cortisol < 10 mcg/dL (N=22, 29.3%) (Figure 10) was found. Which may be due to the complex interaction of neuro endocrine & immune system or due to exogenous irregular intake of oral corticosteroids [21]. To the best of our knowledge there is no published data attributable to find the significance of lower cortisol level in polysensitized respiratory allergic patients.

Our study has several strengths and limitations that are worth acknowledging. One strength is that our study was based upon data collected from a nationally representative population with a wide range of age. This allowed us to directly compare sensitization rates in subjects of different ages suffering from respiratory allergies (allergic rhinitis bronchial asthma). Secondly, sensitization of subjects was confirmed by a standardized measurement of allergen-specific IgE and skin prick test (cutoff for sensitization considered as SPT > 4mm wheal Size & specific IgE >1 Ku/ml). Thirdly, we limited our subjects to those with a history of physician diagnosed respiratory allergic diseases and with active symptoms, and excluded patients with possible non allergic diseases.

a. Skin prick test and Specific IgE concordance (cutoff for sensitization considered as SPT > 4mm wheal Size & specific IgE >1 kU/ml) were found to be immunologically significant. Both tests are equally acceptable with higher sensitivity levels 100% and higher percentage of Positive Predictive Values (PPV) 74.6 %. There was high agreement between both the tests in cases of mites, pollen & cockroach and low levels of agreement in case of fungi & food allergens. Poly sensitization based on specific IgE and SPT (figure 4) had maximum cases of dust mite (n=67, 89.33%), fungi (n=21, 28%), pollen (n=56, 74.6%), Cockroach (n=57, 76%).

We would like to thank Mr. Kamal Upadhyay for collating the data for the study and Mr. Sushant Tyagi for supporting in data management and analysis for the study.

© 2021 Kathuria PC, et al. This is an open-access article distributed under the terms of the Creative Commons Attribution License, which permits unrestricted use, distribution, and reproduction in any medium, provided the original author and source are credited. 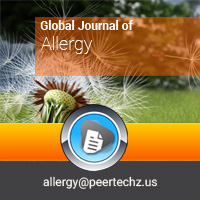