This study aimed to preliminary examine the effect of DMV stimulation on cognitive function in the elderly with moderate dementia. In the single arm study, 5 participants over 85 years old (% female: 100%) with Alzheimer’s disease completed treatment of DMV stimulation with 15-40 Hz. 15-40 Hz DMV stimulation was provided during the entire day for 4 weeks. We evaluated therapeutic efficacy on cognitive function including WM, trail making test-part A & part B and the symbol digit substitution task in the participants, comparing outcomes at baseline with those after the 4 weeks intervention. According to statistical analyses, the WM improved significantly after the intervention (p = 0.043), and the others didn’t have significant improvement. Our result showed that this DMV stimulation might have potentially positive impact on cognitive memory function in older adults with moderate level of dementia. In conclusion, living environmental intervention utilized 15-40 Hz DMV stimulation can contribute to the new nonpharmacological treatments without invasiveness for the elderly with dementia.

Deep Micro Vibrotactile (DMV) stimulation is an ultra-bass / non-audible sound of 40 Hz or less and a low sound that belongs to non-audible range in human being [1]. 40 - Hz oscillation of DMV stimulation is suggested to present at many levels in central nervous system and the vibrotactile stimulation can generate cognition in humans [2]. An intervention study utilized DMV stimulation for Alzheimer’s Disease (AD) patients have reported that sound driven vibrotactile stimulation of the somatosensory system at 40 Hz can potentially enhance the electropotential power in AD patients (e. g. n = 18) and may, accordingly, contribute to improvement in cognition [3]. In a study of Clements-Cortes A, et al. (2016), both of 40 Hz DMV stimulation and visual stimulation using Digital Versatile Disc (DVD) have been applied as an intervened method for AD in- and outpatients from the healthcare facility. However, whether effect of 1540 Hz DMV stimulation has a positive impact on any kind of cognitive domains in the elderly with dementia remains unclear. Despite advanced pharmacotherapy in AD patients [4], currently there is substantial interest focused on non-invasive treatment to drive brain activity in 45 Hz DMV stimulation. Thus, the purpose of this study is to evaluate effect of 15-40 Hz DMV stimulation on cognitive subdomains in older adults with dementia.

Five participants (5 female, ages 89.0 ± 3.1) diagnosed with AD were recruited from a single nursing facility, and completed all the therapeutic sessions. Our study had the small sample size and a single arm design (no-control). See Table1 for the participant summary. According to Clinical Dementia Rating (CDR) to assess the cognitive status [5], the participants were classified as moderate level of dementia’s severity. Exclusion criteria included severe systemic disease, or neurological disorder other than dementia. Informed consent was obtained from the participants or the substitute decision makers prior to starting this study.

This study was approved by the ethics committee of the Department of Health Science, Akita University (approval No. 273).

15-40 Hz DMV stimulation was carried out during 24 hour for continuously 4 weeks through vibrotactile stimulation and inaudible low-frequency sound administered with DMV system consisting of MP3 player (RUIZUⓇ Digital Player X02) to control DMV sound, amplifiers and speakers (Figure1). Deep Micro Vibrotactile, DMV [Japan Patent No.6661210] is a low frequency of 40Hz or less that does not affect audible sound such as distortion. Hearable sound such as voice or environmental noise masks the DMV acoustically, so the DMV cannot be heard. When the sound pressure of low-frequency sound is intense, it vibrates the generator’s housing, windows, and doors. DMV is at sound pressure that does not cause such vibration. Generally, a low-frequency sound of 20 Hz may generate vibration at a sound pressure at 80 dB or more. Whether or not the exposed DMV exists in the space, we examine acoustic sound or investigation with a low-frequency microphone. In this study, to perform acoustic analysis, room sounds with and without DMV were recorded and compared and analysed using acoustic analysis software (such as Audacity). Hearing 40 Hz to Alzheimer rats reduced amyloid-beta accumulation [6], which suggested that 40 Hz suppressed the progress of Alzheimer’s disease. Considering Martorell’s report (2019) that 40 Hz was the most effective, one study proposed new uses for embedding very low frequencies in sound as called the deep micro vibrotactile (DMV) [1]. The range of vibrotactile stimulation was set up at the 15-40 Hz range controlled by the amplifiers. These devices were manufactured by Kaga Eletronics, Co., LTD (Tokyo, Japan). Its stimulation was broadcasted through the three low-frequency speakers located in the facility. All the participants had ordinary daily life activities in the environmental setting with DMV stimulation.

The cognitive evaluation included Tablet version of Word list Memory (WM) as memory, the tablet version of trail making test-part A (TMT-A) & part B (TMT-B) and the tablet version of the Symbol Digit Substitution Task (SDST), using the National Center for Geriatrics and Gerontology Functional Assessment Tool (NCGG-FAT) [7]. WM test consists of two computerized tasks of immediate recognition and delayed recall. At the start of the immediate recognition task, 10 target words were individually displayed for 2s. After presenting all the target words, participants were then required to correctly touch the target words in a total of 30 words including 10 target and 20 non-target words and completed the trial three times. The average number of correct answers was scored as a score ranging from 0 to 10. In another delayed recall task, participants were instructed to correctly recall the 10 target words after 20 min. In TMT-A, target numbers from 1 to 15 were randomly presented on the display. Participants were required to touch the target number in order as possible. In TMT-B, participants were instructed to touch target numbers from 1 to 15 and letters in turn. The required time (seconds) to complete each task was scored, with a maximum time of 90 s. SDST, nine pairs of numbers and symbols were presented in the upper part of the tablet display. When a target symbol was shown in the center of the tablet panel, participants were instructed to select the target number out of selectable numbers displayed at the bottom as quickly as possible. The cognitive evaluation was performed at baseline and after the 4week intervention. The caregiver of the facility managed the participant’s condition during DMV stimulation. As statistics, the Wilcoxon signed rank test was applied to compare cognitive items between pre- and post-tests. SPSS version 26.0 (SPSS Inc., Chicago, IL) was applied for the statistical analysis, and the significant level was set at p < 0.05.

Five participants completed the 4 weeks follow-up. Table 2 shows a result of pre- and post- intervention. Only the WM significantly improved after the 4 weeks intervention (p = 0.043) but the other domains including TMT-A, TMT-B and SDST didn’t have significant improvement.

A result of this study suggest that 15-40 Hz DMV stimulation can increase short-term memory function as indicated in improvement of WM. Of limited information on effect of 40 Hz stimulation to cognition in AD patients, Clements-Cortes, et al. study [3] reports that a total score of Saint Louis University Mental Status (SLUMS), which includes orientation, short-term memory, calculations, naming of animals, clock drawing and recognition of geometric figures, tends to be increased in each AD patient (n = 18) after the 6weeks intervention (e.g. two times per week for 6 weeks) included either 30 min of visual stimulation or 30 min of 40 Hz stimulation [3]. Because Clements-Cortes, et al. [3] didn’t applied the pre- and post-test to assess effect size for each AD groups (mild, moderate, severe), a result of moderate AD patients in our study couldn’t directly compare with the previous finding of Clements-Cortes, et al. study [3]. However, our result raises the possibility that short-term memory can be enhanced throughout non-invasive environmental intervention utilized 15-40 Hz DMV stimulation. Relate to 40 Hz DMV stimulation, 40 Hz neural oscillation is frequently emitted from nerve cells with the activity of a healthy human brain, which is a fundamental role in the communication of information between nerve cells [8,9]. Furthermore, several studies have suggested that 40 Hz oscillation implicated in the intra-brain communication stimulates neural outgrowth [10] and may become a covariate of cognition, not limited to an induced sensory phenomenon [1]. Martorell et al. study (2019) reports that repeating at 20 Hz, 40 Hz, and 80Hz stimulation improves cognitive function in dementia mice. This study is improved memory for five participants, we suggested that stimulation at 15-40 Hz may improve cognitive function for elderly as much as stimulation at 40 Hz [6]. The future research needs to be accomplished considering the follow; our study samples was small as well as a single group intervention without a control group. Therefore, future studies should be increase the number of subjects, especially including male subjects. Outcomes other than cognitive domains didn’t also include for analysis. Although preliminary interview data from a caregiver of the facility included a positive comment on better sleep state during the night, effect of DMV stimulation upon awake and rapideye-movement sleep states associated with 40 Hz neural activity [2] warrants further investigation.

In conclusion, our finding would suggest that 15-40 Hz DMV stimulation might be of utility as one of nonpharmacological treatments to enhance short-term memory in AD patients. However, the research limitation regarding the small-sized sample, no control group and effect of parameters other than cognition in AD needs to be considered in the future study.

The authors would like to thank all of participants for their enthusiasm in participating in this project and making this study possible. We would also like to thank Y Tamura (Kaga Eletronics, Co., LTD) for development of DMV devices, T Endo, K Sugawara (Akita University) for their managements.

© © 2021 Kodama A, et al. This is an open-access article distributed under the terms of the Creative Commons Attribution License, which permits unrestricted use, distribution, and reproduction in any medium, provided the original author and source are credited. 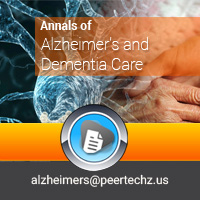