Background: Influenza generally known as flu is due to viruses that contaminate the respiratory region. It can result in light to cruel sickness, and may cause death. The influenza pandemic of 1918-1919 took life of a lot more people than the World War 1. Peramivir that inhibits the purpose of the viral neuraminidase protein of influenza virus, therefore stopping the virus from replicating through budding from the host cell has been shown to have hindrance against virus. The neuraminidase enzyme is a glycoside hydrolyses enzyme that is shown on the exterior. It allows the virus to be free from the host cell and slice sialic acid groups from glycoproteins and is necessary for influenza virus reproduction.

Methods: This study concentrates on the in silico virtual screening and molecular docking examination for probable neuraminidase blockers by peramivir like compounds recovered by the ZINC database. ADME-Toxicity examination is done by in silico methods.

Conclusion: Modified ligand Anamivire is shown to have resistance against neuraminidase enzyme and bioavailability troubles than ZINC3981610, ZINC40709762 and peramivir.

The flu is the infectious respiratory sickness caused by influenza viruses [1]. Flu viruses are separated into 3 kinds chosen A, B and C [2]. Influenza types A and B are cause for outbreaks of respiratory sickness and frequently result in death. Type C generally result in very light respiratory illness it does not result in outbreaks and does not have the cruel public health impact. Influenza viruses are members of the family Orthomyxoviridae and include a genome of negative-strand RNA units [3]. The influenza virus is based on the sixteen hemagglutinin (HA) and nine neuraminidase (NA) encircle protein [4]. HA protein act a fundamental part in the addition of the virus to host cell membrane surface glycoprotein or glycolipid by multivalent connections to the sialoglycans [5], and making possible the spread of newly synthesized. Virus in the host and is an important target for controlling disease succession. The signs of disease vary from fever and anorexia to coughing, rhinorrhea, gastrointestinal trouble.

The neuraminidase enzymes are glycoside hydrolase enzymes (EC 3.2.1.18) present on the exterior of influenza viruses facilitate the virus to be set free from the host cell and slice sialic acid groups from glycoproteins and are essential for influenza virus reproduction. It also acts a vital part in making possible the distribution of recently prepared virus in the host and is significant aim for stoping disease succession [6,7]. Peramivir a neuraminidase blocker showing the role of the viral neuraminidase protein, so stoping the virus from replicating by budding from the host cell has shown to have hinderance. In significance of this task, the developing of novel possible blockers against this enzyme might show new group of neuraminidase blocker. Therefore, the current examination objectives on virtual selection of neuraminidase blockers with a number of peramivir similar to compounds recovered from the ZINC database and docked arrangement of peramivir along with PASS calculation and ADME-Toxicity possibility.

3D structure of neuraminidase of influenza virus was obtained from PDB (Protein Data Bank). Its PDB ID is 1NN2. The crystal configuration of neuraminidase of influenza virus made of two chains. We just used chain A for molecular docking in this study. All the water molecules and co-factor were also detached. We also removed the ligands which were already attached with the protein.

We performed molecular docking by utilizing Auto-Dock Vina. After the preparation of protein and ligands there PDBQT files were saved in the Vina folder. Then grid is made by opening the protein structure at Auto-dock. Grid cavity size is selected to bind the compounds. The bond elasticity of ligand was placed by making torsion in the ligands. Pay Mol is used to see the attraction among the substrate protein and the ligand [8] (Table 2).

ADMET properties are checked by using MED CHEM DESIGNER. It gives immediate contact to spectral and chemical databases, and foresees functions like physicochemical, ADME and toxicity properties [9]. Scoring was also carried out by using web-based service that is DSX-Online.

We downloaded the 3D structure of neuraminidase from PubChem Database. We have performed Molecular docking by autodock

Figure 1a: Predicted bonded interaction between Aramivire with the Neuraminidase enzyme.

Figure 1b: Predicted bonded interaction between Aramivire with the Neuraminidase enzyme.

Figure 2a: Predicted bonded interaction between Munimivire and Neuraminidase.

Figure 2b: Predicted bonded interaction between Munimivire and Neuraminidase.

Figure 3a: Predicted attraction between Anamivire and neuraminidase.

Figure 3b: Predicted attraction between Anamivire and neuraminidase.

Furthermore we have examined the pharmacological factors by means of ADME/Toxicity assessment that is revealed in Table 3, where it symbolizes the molecular mass, hydrogen bond donor and acceptor, and examined log p. From the ADME/Toxicity study, it is discovered that peak docked molecules have enhanced quantity of circulation, improved permeability and superior absorption rate in contrast to Peramivir (Table 4).

We have executed molecular docking examination and the molecular attraction analysis exposed that Anamivir have positive molecular interaction at the binding opening of the neuraminidase enzyme in contrast to Paramivir - an effective neuraminidase inhibitor. Best docking hits Aramivire, Munimivire and Anamivire utilized in this learning are a clear guide like molecule. Furthermore, ADME/Toxicity calculations exposed that Anamivire have improved pharmacological limits as compared to Paramivire too. So, we conclude that the molecular docking investigation and the ADME/Toxicity examination of Anamivire sustain experimental examination of these molecules to spot them as a major compound like Peramivir is informed to have hindrance against neuraminidase enzyme and bioavailability troubles.

© 2017 Khan J, et al. This is an open-Access article distributed under the terms of the Creative Commons Attribution License, which permits unrestricted use, distribution, and reproduction in any medium, provided the original author and source are credited. 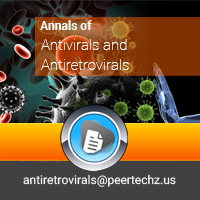